As I stood in the quiet Iowa cemetery, I watched my 10-year-old son as he flitted around my Father’s tombstone. Grandpa had suddenly and unexpectedly had an aortic aneurism this year, and before we knew it, was gone from our lives. My sons Grandpa was a larger than life personality, and while I wrestled with my own grief, I worried about the large void left for my son, who was 10 and had been very close to his Grandpa. The whole experience was so sudden and a blur, and I wondered if I had traumatized his grief process since I was still running to catch up with my own.

Out of the corner of my eye, I noticed Hayden catching the glowing fireflies that had popped out during the twilight hours. He was cupping them to his mouth, saying something, and then releasing them into the air. As I shuffled closer, curious, I over heard him whispering to the fireflies “Protect Grandpa”, before releasing them. That bittersweet moment is etched into my memory, and for some reason, left me feeling a bit more peaceful. Perhaps Hayden was coping better than I had thought. Better than his Mother, anyway.

Grief is a tricky business, for both adults and children. And let’s face it; nothing prepares you for this business until your knee-deep in it. But don’t make the mistake in thinking that kids don’t grasp the grieving process. Kids can grieve at any age, and it depends on their age, developmental stage and life experiences.

Inez Bersie-Mize, a licensed family therapist with Midwest Center in St. Paul, agrees that the child’s age makes a big difference. “Their cognitive abilities, and the ability to understand and comprehend makes a big difference,” she explained, “around 7 and 8 they still have that magical thinking, that the person could come back, or that ‘Grandpa looks like he’s sleeping’. It’s very common for that age to have that thinking. Their capacity to tolerate pain, and whom they have around them also makes a difference. Their relationship to the person who died comes into play. Kids are very tuned into their sense of pain, and if they think the person died, had a great deal of pain or trauma, then they’ll have a harder time getting over it then someone who died in their sleep.”

Come to think of it, son Hayden’s first questions about Grandpa’s passing was pain-related. Questions such as “Did it hurt?” “Did Grandpa know what was happening to his heart?” Other kids, who have witnessed someone battle an illness, deal with different questions. When Molly Sproull lost her Father to bone cancer, her son was 6 and daughter was in 3rd grade. “My Father was in hospice, so we all knew it was coming,” Sproull remembered, “So Ben got to say goodbye. I didn’t really pay much attention growing through the process. He was on his best behavior (during the illness) because of what I was going through. But after the funeral, that’s when he really started acting out.”

Sproull said the calls from teacher started coming soon after the funeral, and involved throwing objects and reacting to other kids. “I look back, and I realize he was grieving,” said Sproull, “he was just not himself. I always tried to answer his questions (about Grandpa) without scaring him. It was hard. My daughter Abby had more tears. She understood a bit more, and I didn’t really see any negative reactions with her. She was more Mothering to me, asking if I was OK. She recognized I was grieving, even as a 3rd grader.”

Bersie-Mize said that’s the fine line that parents must walk while going through their own grief process. “It’s better to explain it then to hide it,” stressed Bersie-Mitze, “they need to know what’s happening, what the wake will look like, and have a choice to go or not to go. They need to be informed. A lot of kids fear crying, but when everyone else is crying, it helps them make that decision. They need to be informed.”

Brent and Christie Cuttell, Cottage Grove, are advocates of being informed. Brent lost his Father last year after an extended illness, and the couple’s three children range in age from 7 to teenagers.   “Kids grieve in a similar sense that we do, but it’s more pronounced. Everything a child does is more pronounced…they are louder and faster than we are, and their minds are sharper,” said Brent Cuttell, “youngest son Camden was 7 and a half when Grandpa died. He’s a visual kid, so whenever he sees a red hat, like his Grandpa Cuttell used to wear, he gets emotional. He’ll say ‘I miss Grandpa’, or “That guy in the red hat looks just like Grandpa’. They figure out that stepping stone – you have a Grandpa, you might even have a Great Grandpa. Now that Grandpa’s gone, that void is filled with Dad or Mom. That stepping stone and known, rock solid entity is gone.”

Christie Cuttell, who is a social worker at Psyche Recovery, Inc. in St. Paul, says her knowledge of the grief business helped her cope with her own family’s journey. “Americans are horrible at death and dying,” she explained, “we don’t like to talk about it, we don’t plan for it, yet it’s the only thing that is absolutely sure. It’s very frustrating when you work on death and dying. The more open we are with our kids and each other, the smoother it is going to go.”

She said youngest son Camden’s grief comes and goes in short waves and bursts, usually associated with visual triggers. “At first he was very careful not to grieve in front of us,” remembered Christie, “he didn’t want to upset people more. But when he went back to school and the teacher had given him an assignment to write about feelings, Camden could only get through 2 sentences, before he burst out crying. I do think kids generally grieve better than adults. They are not at all selfish. Their genuine, and to them, it’s very literal.”

The Cuttell’s said their older teenagers took on a different grieving pattern. “Myles, being the boy, was more non-verbal,” remembered Christie, “but his actions were kinder. He was not causing trouble, and would let things go that he usually wouldn’t. He was just quieter. Daughter Abby just cried her brains out, night and day. The teenaged kids had a very difference connection with Grandpa, as they are so much older than Camden. They saw Grandpa healthy, and he wasn’t sick in their memories.”

“Some of it is really just talking with them,” explained Bersie-Mize, “it really is. It’s OK that it hurts or that it’s scary. It’s OK to say those things to kids. The more they are involved in the planning, the better. It’s important not to exclude them from your own grief. Explain how you feel inside, so they don’t feel alone or isolated.”

Through the whole process, watch for warning signs of something deeper than “healthy” grief. “Watch how long they are staying in grief,” explained Bersie-Mize, “and if they are functioning in school and with friends. Are they isolating, or getting angry. Things like that should not be ignored, and sometime professional support is needed.” Other factors to watch include inability to sleep, or loss of appetite, acting much younger for an extended period, repeated statements for wanting to join the dead person, or excessively imitating the deceased family member.

She went on to explain that it wasn’t until around the 1950’s or later that children were included at all in the whole grieving process, and until then was kept very separated from the whole ordeal. “Including them in the process, perhaps picking out flowers, or writing poems to put in the casket, are all closure activities. Talk about how sad it feels, and the hurt inside. Let them see the tears.”

With our family, we included all the grandsons as much as we could in the planning, and communicated what would be going on during the wake and the funeral itself. Hayden had the choice of viewing Grandpa during the wake. He sat in the back of the church in the last pew for a short time before making up his mind and marching up the aisle resolutely next to me. We also let each of the grandsons choose a “Grandpa treasure” from his dresser, and they all carried them in their pockets during the funeral. I noticed Hayden rubbing his Grandpa’s favorite pocketknife during the funeral.

After our visit to the cemetery that day, Hayden asked if Grandpa had known we were there visiting him, or if he was too busy up in heaven. 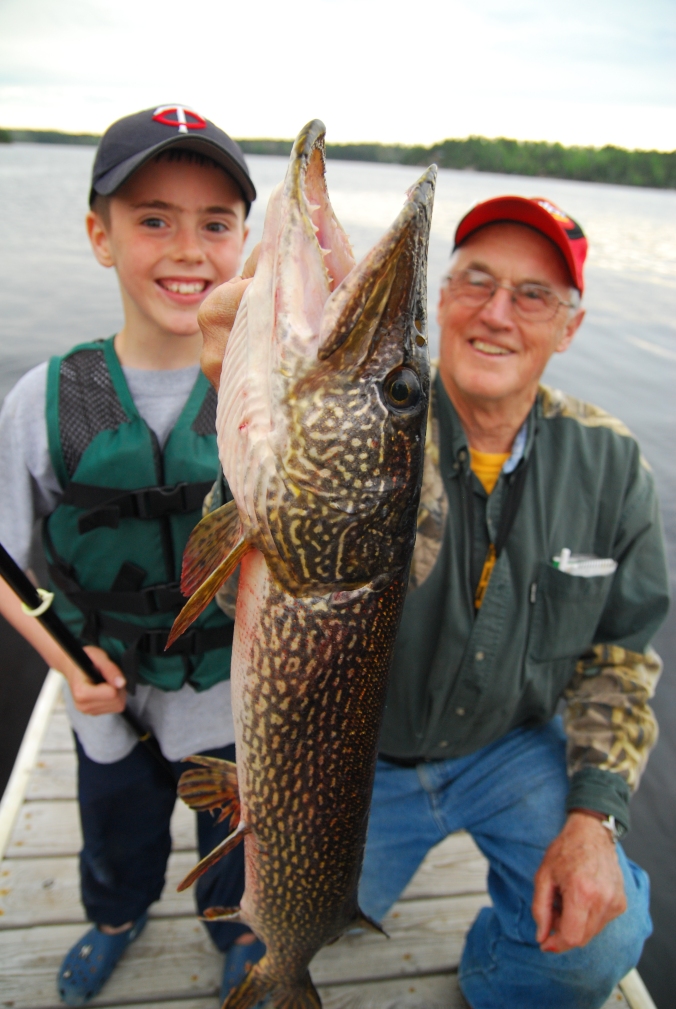 I guess only the fireflies and Grandpa really know the answer to that question.

The Fall of Freddie the Leaf – Leo Buscaglia

The Next Place – Warren Hanson

The Old Coyote by Nancy Wood